Somewhat of a picture-heavy post this one, I expect, but we’ll see.

So, while I’m waiting to do the final edits on DARK SKY I’ve been amusing myself by fiddling around with a fantasy project. Well, I say ‘fantasy’: in actual fact there’s a lot less fantasy in it than in my science-fiction, where in a lot of cases I’ve gone “eh, technology will probably be able to do this by then”. As a result, I’ve realised that for someone who’s always been fond of things set in Ancient Times (and who can get hung up on accuracy where it’s reasonably possible) I’m somewhat uncertain on many of the terms for the different types of weapons and armour that have existed over the centuries. In an attempt to counteract this a little I took a trip to the Royal Armouries in Leeds:

Of particular interest to me was their Half-Term display on the Eastern Warriors: arms and armour from across Asia, from Turkey right over to Japan. This is because one of the cultures I’m writing about is at least somewhat based on feudal Japanese culture and their weapons and armour, as opposed to the Western, knight culture-dominated world of things like A Song of Ice and Fire. In these cultures you didn’t really get the full plate, and you got more stuff like this:

Lots of little scales sewn together into a flexible but hard-wearing defensive coat, topped off with a badass helmet. They also apparently tended to have metal face masks:

It’s quite surprising how many different ways humanity has come up with of making weapons, even ones which on the face of it would seem the same. If you think of a ‘sword’, for example, most people in the west would probably think of something like this little lot:

However, a quick trip round the Armouries demonstrates that different places did things very differently. Here are some African swords, for example:

There were also some Turkish swords which were so curved they couldn’t have been conventionally drawn from a scabbard and would have had to come out of the back, possibly with some sort of spring arrangement. Also, check out this weird dagger with five points:

Also, double swords, i.e. swords which look like one blade in the scabbard but when you pull them out they turn into TWO blades with half the handle on each. I thought that was ridiculous when I saw it in the rebooted Conan movie, and I had no idea people actually did that in real life: 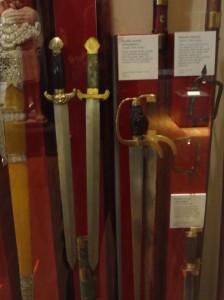 One final photo now: the Hall of Steel, which is basically an enormous monument to the violent death of human beings but which is damn impressive nonetheless.