I’ve been meaning to do a blog post for a while, covering stuff like Rogue One (it’s very good, by the way) and other general things, but I was a bit busy (or lazy) and didn’t, and now something rather more pressing has emerged.

Yesterday it was announced that a rather unpleasant individual who actually managed to get himself banned from Twitter (which is practically impossible) has received a $250,000 offer for an autobiography from Simon & Schuster. S&S are one of the ‘Big Five’ publishing houses and are the parent company of my US publisher, Saga Press. There was an immediate backlash against this announcement, as this individual (whom I won’t name, since he’s had enough publicity) has made himself decidedly unpopular with some people going so far as to label him a white supremacist. I don’t know if that’s quite accurate – he seems more like a Katie Hopkins-esque shit-stirrer who feeds off controversy whether or not he believes what he spouts – but whether it is or not, there’s no doubt that his words and actions, and the words and actions of those who follow him and whom he’s encouraged, have caused a great deal of hurt and misery to those who have been targeted.

Now, the Chicago Book Review took to Twitter to announce that they will not be reviewing a single book from S&S for all of 2017 in protest at their decision to give a broader platform to someone whose public persona and actions are largely based around victimising others (it seems reasonable to assume that an autobiography would continue such a theme). I have two books coming out in 2017 – the US release of Dark Sky in July, and then Dark Deeds later in the year – and I am, technically at least, a Simon & Schuster author. I responded to the Chicago Book Review’s tweet, explaining that such a blanket ban will affect many authors and imprints who would want nothing to do with the sort of agenda that the book they’re concerned about would be promoting.

I’ve had a whole gamut of responses but they can basically be broken down into three types:

a) “You should find a new publisher”. This varies from “your current publisher doesn’t deserve you” to “if you are in business with them you’re giving money to Nazis” (one guy actually told me he couldn’t imagine working for the people who published Mein Kampf. Although we don’t know what the future will hold for the writer of this autobiography, that seems like it might be a slightly extreme analogy). What all of these people don’t seem to realise is that I have a contract with Saga, and the contract for Dark Sky was dealt with as far back as February 2015. Many other authors will be in the same boat: even if we wanted to pack up shop and move, it’s not like we can, legally. And also, getting a publisher’s not like hailing a taxi! But more importantly, I don’t want to pack up shop. Saga Press is a brilliant place staffed by people who love diverse fiction and would have no truck with the promotion of racism, misogyny and the rest of it. A few weeks before Christmas I was having a conversation with my editor Joe Monti about the themes for my next project which features rival cultures learning (somewhat imperfectly, and with some conflict) to adapt to and accept each other. He was completely on board with it. They’re cool people there, publishing some wonderful, forward-thinking fiction from excellent people (I don’t really include myself in that, at the moment I mainly just have explosions and spaceships). They also don’t have any control over what the parent company does.

b) “You’re a whiny Millennial/snowflake/liberal” and/or “You’re a victim of the Left’s drive for censorship”. I think the the first part is down to the fact that I’m not happy about S&S’s decision either, and I made that clear. Well, bite me. The guy can say and write what he likes (within existing legal frameworks concerning hate speech and so on) on his own website or wherever, that doesn’t mean I want him to get a global publishing deal. I also think that people fail to understand that “censorship” doesn’t really mean “I don’t think you should publish that”. Censorship is, in its main use, about someone who has the power to ensure that something doesn’t get published. There’s a difference between power and pressure. The only thing the Chicago Book Review would actually be censoring is their own output. They are seeking to use this to put pressure on S&S not to go through with the deal, but they don’t have any power (likewise, the staff at Saga might be able to speak up and use their voices to say “Hey, this might damage us”, but they don’t have any power to change things themselves).

c) “Your response to this has been very reasonable, I’m going to follow you on Twitter/wish you good luck/buy your book when it comes out” (unsurprisingly, I like these people the most).

It’s still going on – my Twitter notifications have never been so busy, with people telling me I’m actually racist, liking all of my tweets in one go, liking tweets where other people have said I should get a new publisher if I’m so bothered about it, and so on. I’m sure actually famous people get this sort of thing all. The. Time. But it’s a bit bizarre for me to have sparked so much controversy just by saying “Hey, I kind of agree with your stance in general, but would you consider the wider ramifications of your proposed course of action?”.

So in conclusion, here is a picture of me trying to play FIFA 17 online with Nimbus sitting on my shoulder: 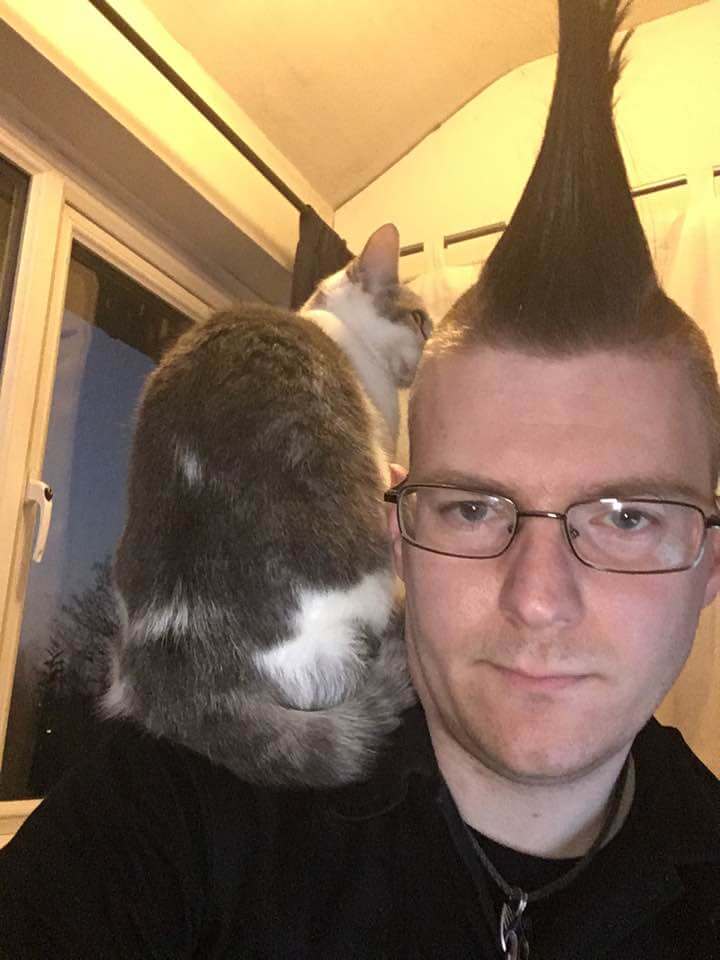