It’s been a couple of months since I’ve blogged. WHOOPS. However, in all honesty I’ve not had that much to say, although I can announce that my Necromunda novella ‘Wanted: Dead’ is going to be released by Black Library this year (I don’t know when yet). I’m hoping I might be able to give some more fun and interesting news soon, but for the moment that’s about all I’ve got.

I’ve been seeing various posts and memes and so forth recently, not necessarily more of them recently, but I guess they’ve collected to some sort of critical mass in my head. They focus on Being An Artist and/or Creating Art. You know, images like this: 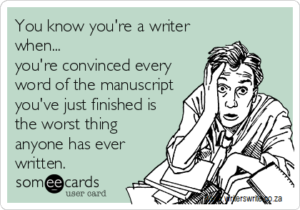 I say these things because a) I get annoyed when people imply that I can’t be a writer, because these things that they say affect all writers don’t affect me, and b) as I said above, I really don’t think it’s helpful. Because there is a difference between “everyone experiences this!” and “it does not make you any less valid as a writer if you are experiencing this”.

I worry that by focusing on the pain, discomfort and anxiety that society tells us goes hand-in-hand with “being creative” (tortured artist, gah), we are in some ways conditioning people to expect to experience these things. That it’s necessary. That, in fact, if they aren’t experiencing these things, that that is a bad thing. I don’t want people to think that they’re not going to be any good at creating stuff if they’re having a good day, mentally. I don’t want someone to be so convinced that their second novel is going to be hell that it becomes a self-fulfilling prophecy. And don’t get me wrong, I’m quite sure there are people who genuinely do their best work when in the grip of personal demons – I don’t think Trent Reznor’s written a single memorable song since he got off the drugs, for example – but I don’t believe it’s universal, and overall I’d prefer it if people weren’t struggling so hard in the first place.

(yes, I know that it’s far more complex than that. I see this as a potential contributor, not as the be all and end all)

So that is what I’d like. I want less normalising of personal pain in the context of being a writer. I want the discussion to shift from “Everyone is like this! This is just how it is! Get used to it!” (which, at the end of the day, is what those memes are saying) to “You are not alone in this, this experience does not make you weak or invalid, but nor is it an inescapable consequence of the creative path you are pursuing. If you come out of this, your work will still be just as valid”.

End of rant, and back to the writing. Keep well, everyone.

3 thoughts on “A well-intentioned rant (aren’t they all?)”