Getting there was a small adventure. I’d planned my route out, noted it down on a page in a notebook which was open on the seat next to me for (careful) reference, along with the necessary page of the UK road atlas, as is my habit. However, since I last made a long trip anywhere I’ve got a new car (when my old Peugeot 206 scraped through its recent MOT with a laundry list of expensive repairs required I bit the bullet and upgraded to a far newer car that, while expensive itself, will hopefully not need any further money spent on it for quite some time). This car has all sorts of flashy features (which weren’t why I bought it) including the ability to link itself to my phone and be its own satnav. So I’d put that on, mainly to help with navigating the smaller streets of Scarborough when I got there.

Thing is, though, my phone is an iPhone, and so the map system that was linked to the car was Apple Maps, not Google Maps (which is what I’d plotted my route on). And so I found that actually it wanted to take me a different route to the one I’d planned. “Take the exit onto the M18” it told me as I was going up the A1(M), to which I said “Nope, don’t think so.” And then I looked ahead and saw that just past that junction the A1(M) seemed to be slowing to a crawl, so I said “I hope you know what you’re doing,” and took the exit onto the M18, trusting myself completely to a satnav for the first time in my life.

Amazingly it worked, and I got to Scarborough okay.

I’d never been to Scarborough before. It’s a small coastal town nestling at the southern edge of the North York Moors National Park, with a harbour and the ruins of a castle (see below): 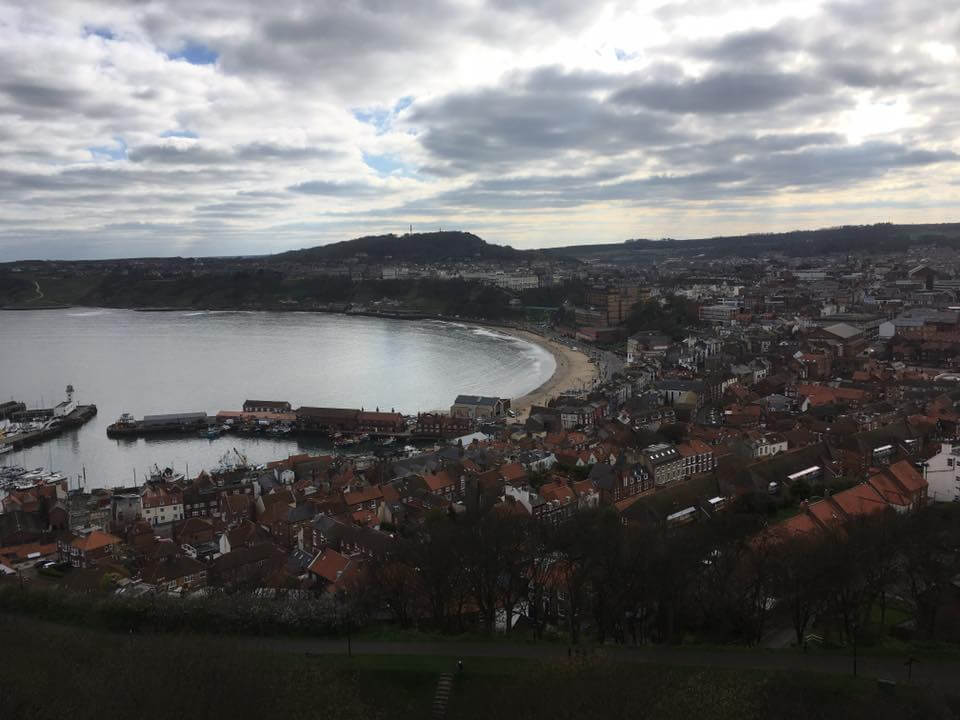 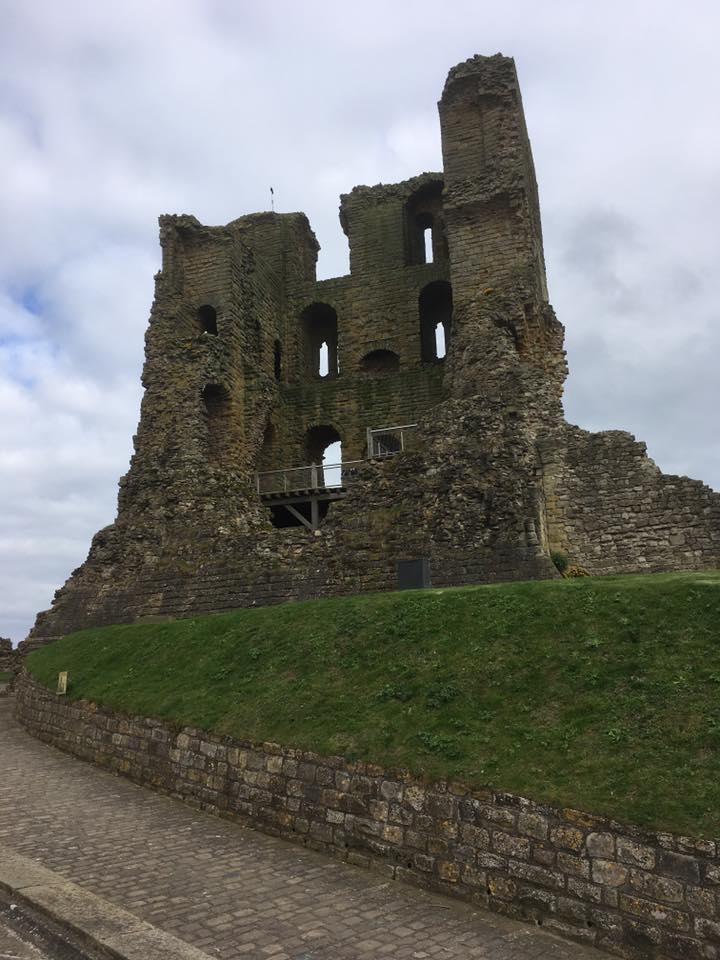 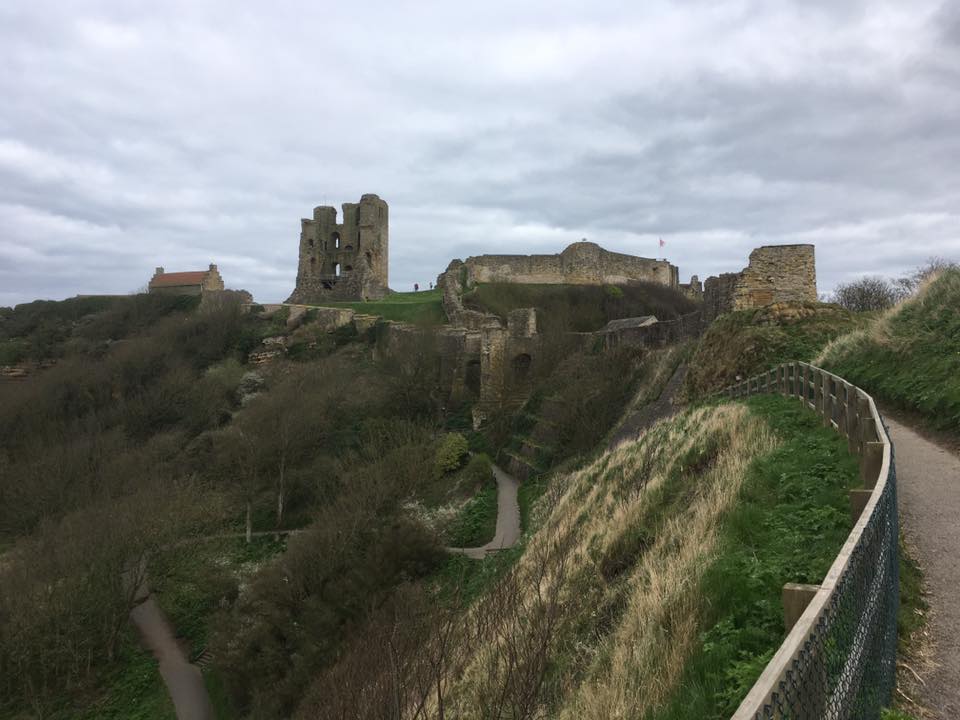 I had a chance to go and check out the castle on the Friday afternoon, before the ‘Fest itself started on the Saturday morning.

One thing I can’t really tell you about Scifi Scarborough is what was there outside of the hall where my stall was, because I was there on my own and I couldn’t really leave the stall to go and see what was on! I know that various workshops and stuff took place, partly because I was sitting next to Jon Campling:

He was running ‘wand workshops’ where he would teach people five ‘attacking spells’ and five ‘defensive spells’ that the actors were taught for the Harry Potter movies, since they were apparently based on actual fencing moves, and then they’d apparently do them while the audience made noises. You can see his left hand (as King Regis from Final Fantasy) in this picture of me at my stall taken by J.S. Collyer (Jex), my con buddy who was sadly on the other side of the hall. 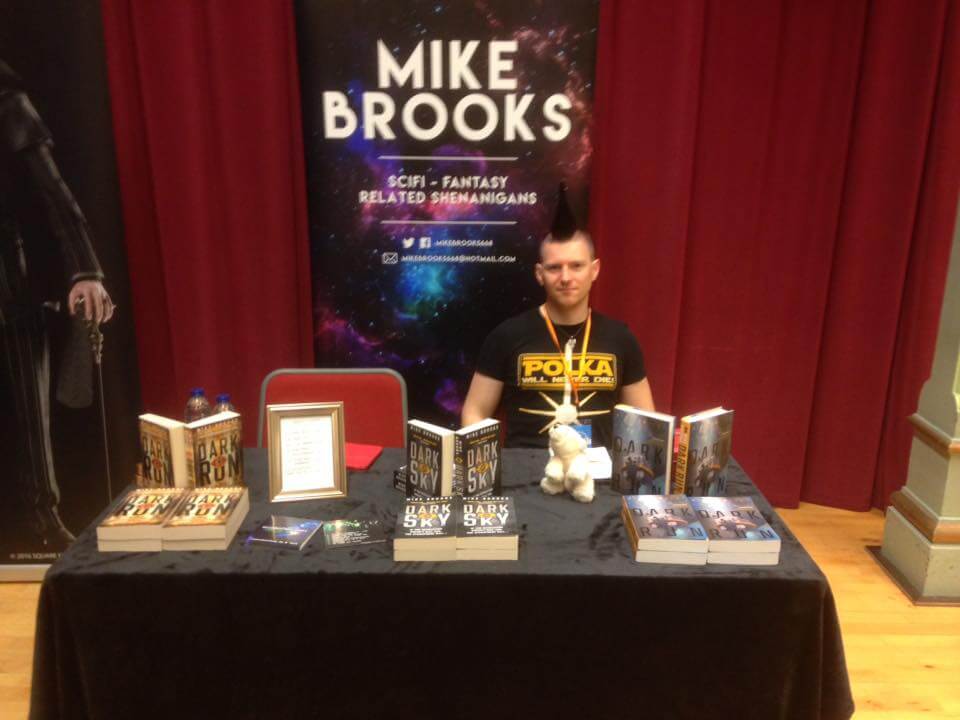 Jon was really envious of the quality of my table covering. Tenner from Wilko’s.

One thing I will say about Scarborough was the quality of costumes on show. I didn’t get pictures of the perfectly kitted-out Darth Vader, storm trooper and scout trooper, or the selection of Judge Dredd judges, but I did get a few others: 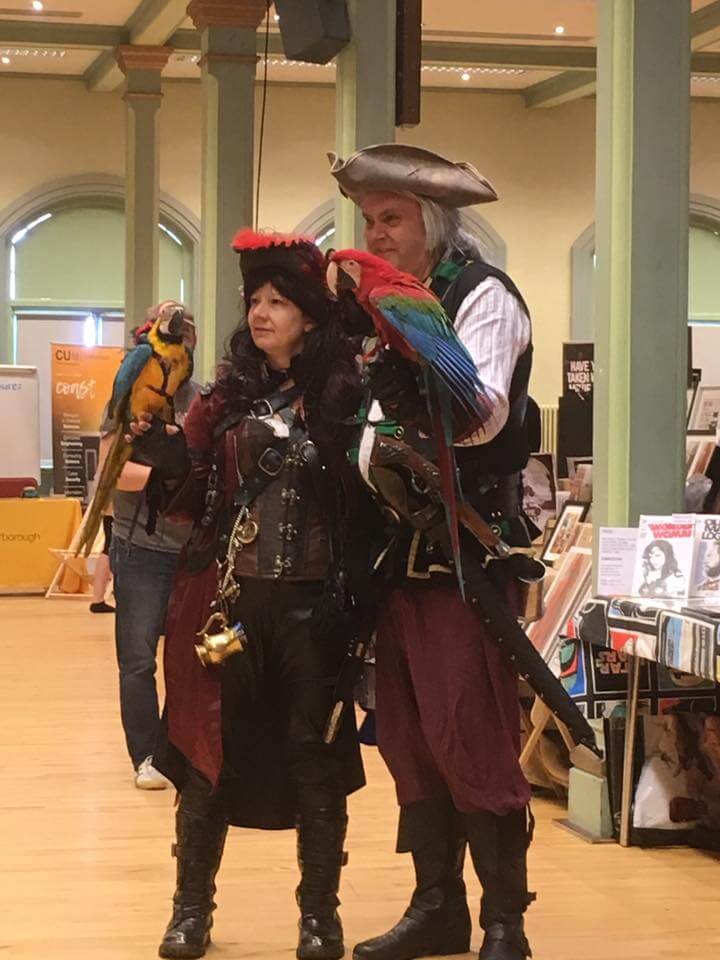 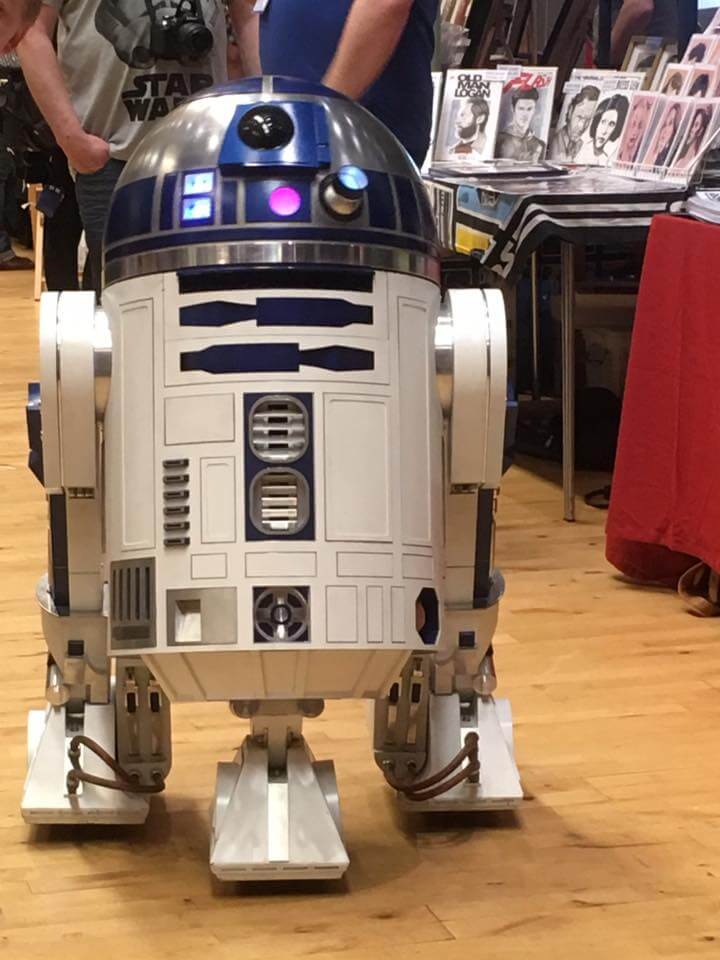 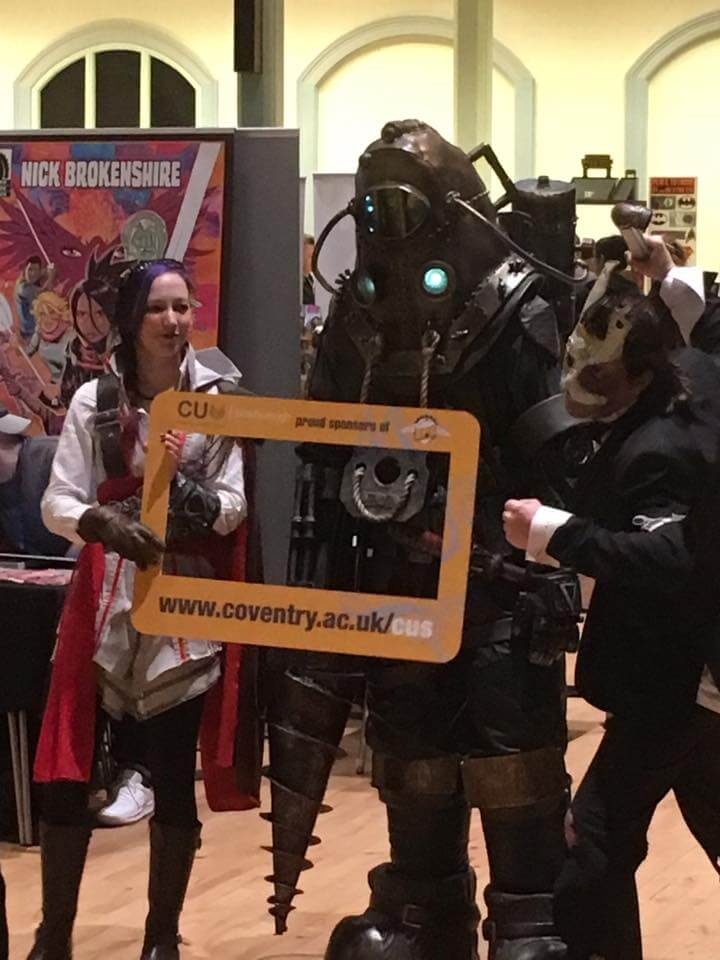 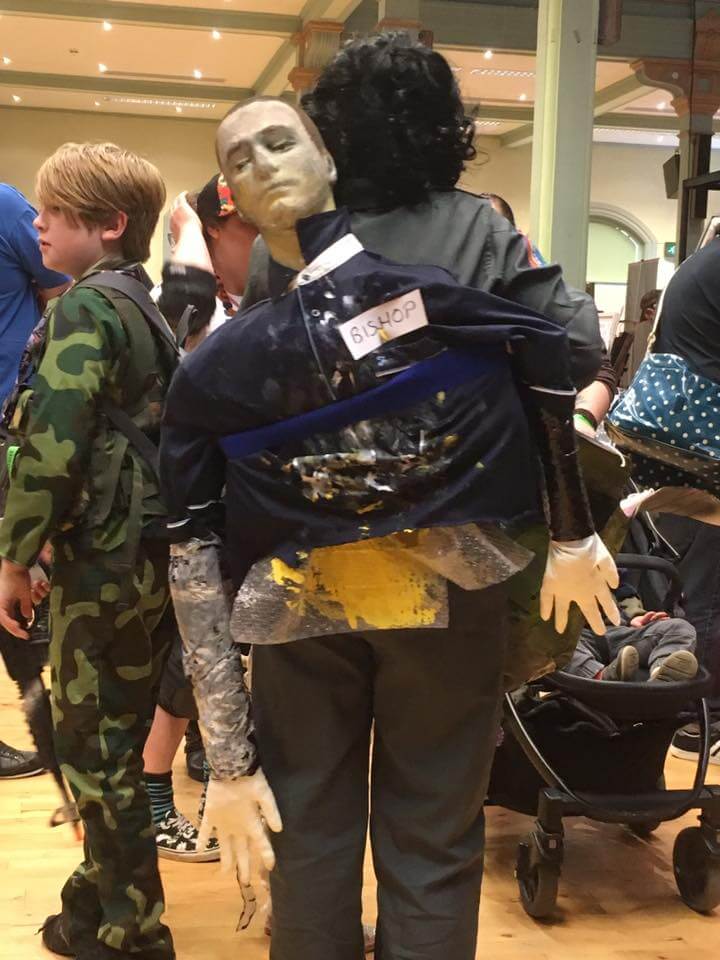 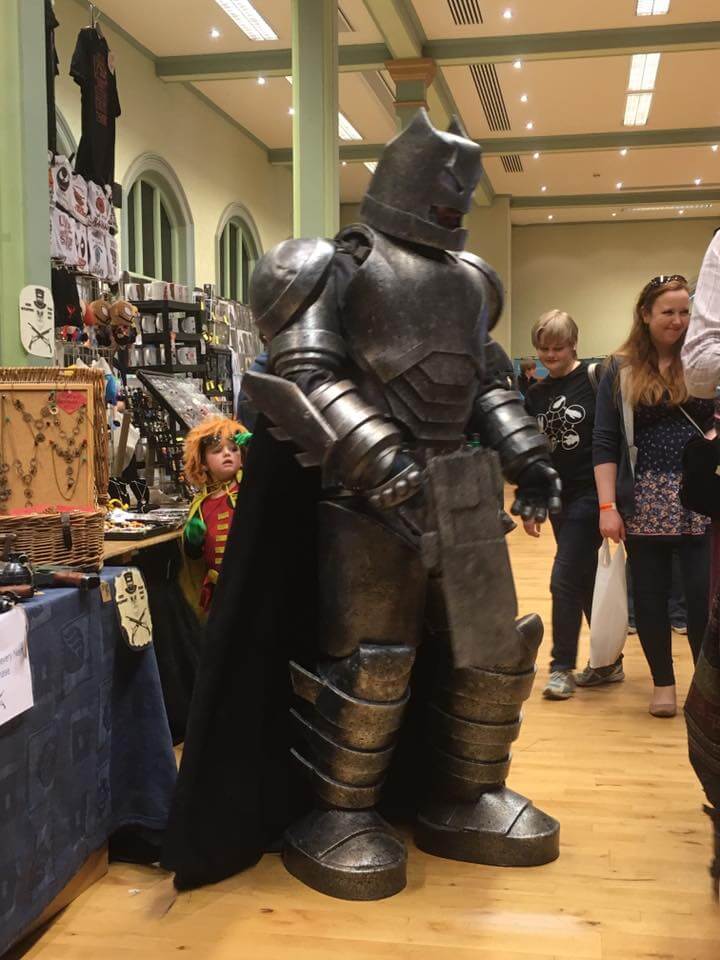 I also met a lot of nice people who came over to chat and, in some cases, buy my books! I also gave some advice to a couple of authors who were a little further back on the progress bar than myself, and found out that I’m apparently famous in the deaf community (it seems that all it takes is for one deaf person to notice that an author wears hearing aids and words get out, at least that’s how it was told to me by someone whose sister had already heard of me).

Fun though it was at the con, it did seem almost a shame to be stuck inside when what I saw of Scarborough looked so nice in the sun. 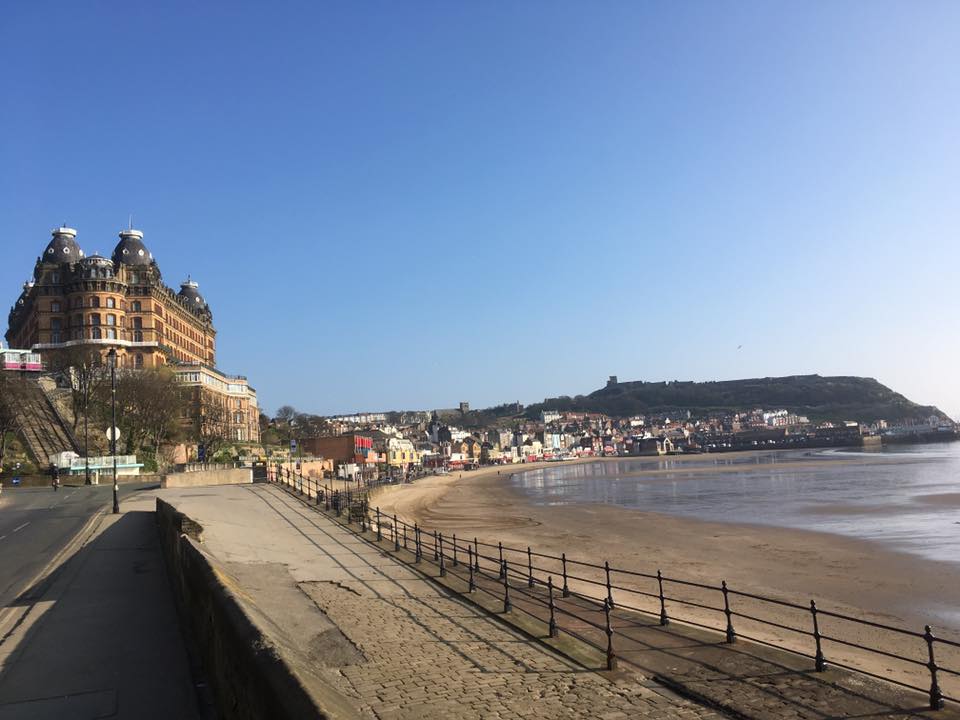 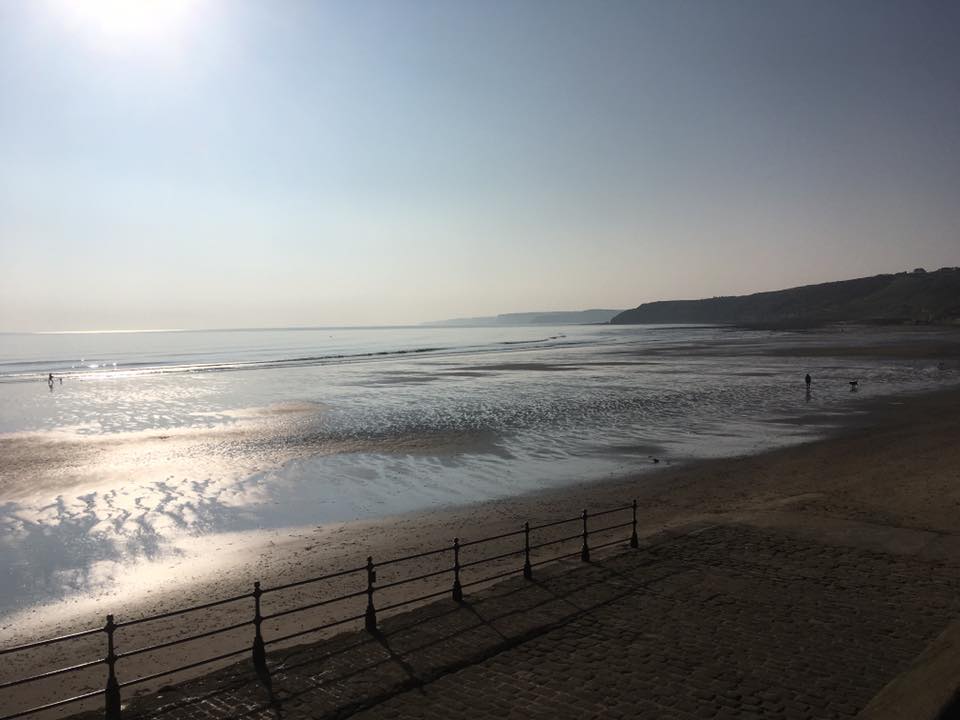 After the Saturday I grabbed some dinner on the sea front with Jex, and I can heartily recommend Scarborough’s fish and chip shops. The harbour looked particularly nice: 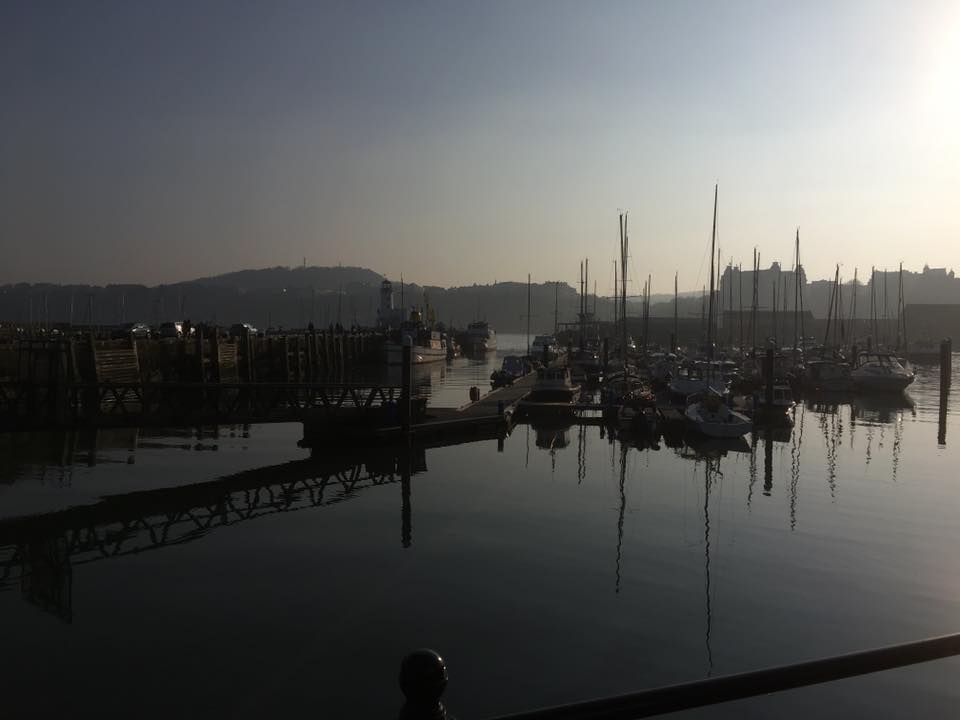 and I also went around Marine Drive to take some photos of the sea bird colony I’d noticed on the headland cliffs when I’d driven around it that morning: 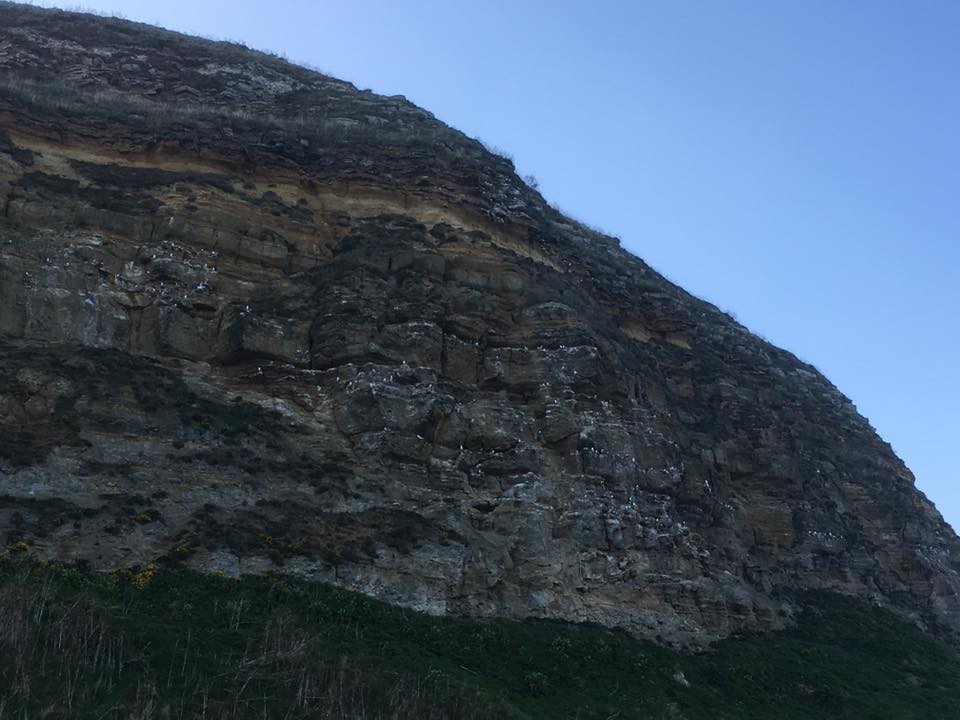 On Sunday evening after a full two days of sitting behind a table, chatting with people, selling and signing books, it was time go home. I’d had a very nice weekend, but what I hadn’t managed to do was cover my costs: when you add in travel, accommodation, the cost of hiring a table there and also the cost of the books in the first place (I get them cheap from my publisher if I want to sell them on, but I still have to buy them), you have to have a lot of interest from the public before you can actually make money selling books at a con. I’m viewing it more as an investment, and a chance to meet and chat with people.

So, Scarborough… I may be back next year. We’ll see! 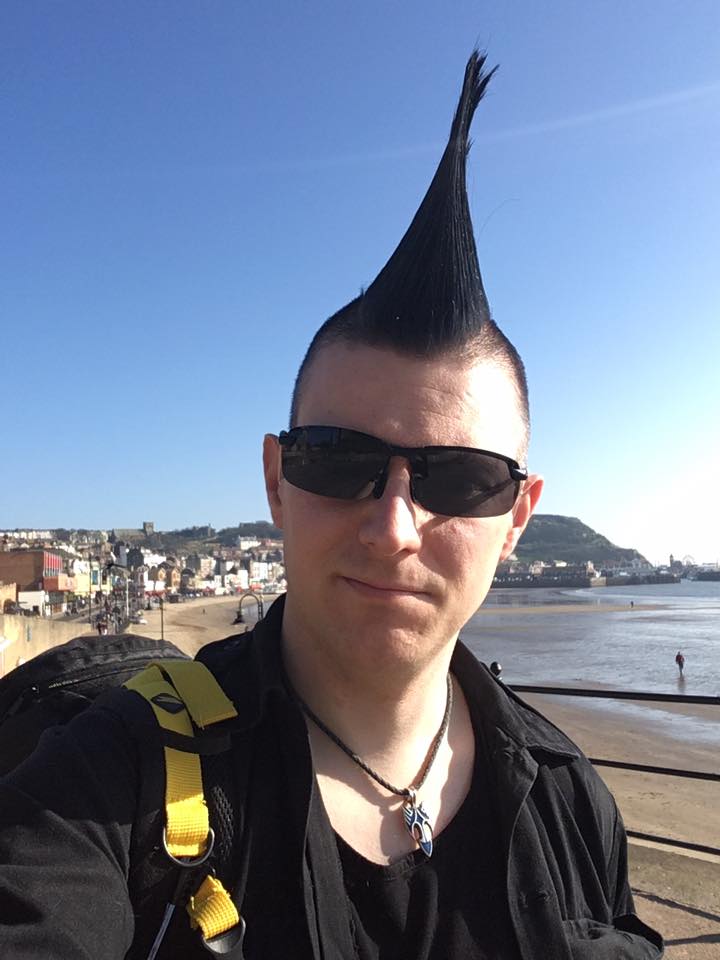